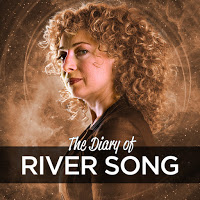 Big Finish has announced today that actress Alex Kingston will be once more reprising her role as River Song for a third series of audio dramas.

Having already encountered the Eighth Doctor (Paul McGann), and the Seventh and Sixth Doctors (Sylvester McCoy and Colin Baker, respectively), the latest series of The Diary of River Song will see River joined by Peter Davison‘s Fifth Doctor.

The pair are set to come across a familiar adversary, with the two facing off against the sinister Madame Kovarian, played by Frances Barber. As revealed in the sixth series of Doctor Who, Kovarian kidnapped River Song’s mother – Eleventh Doctor companion Amy Pond – in order to take and raise River to kill the Doctor, although her villainous plans were ultimately thwarted in 2011’s The Wedding of River Song.

“River has been on a journey through the lives of past Doctors, and in Series Three, she meets the Fifth Doctor (having encountered his Sixth and Seventh incarnations in Series Two, and the Eighth in Series One). So what a treat to throw Madame Kovarian into the mix too, and have Alex, Peter and Frances working together in studio. There was, I’m sure you won’t be surprised to hear, much joy and laughter between takes.”

3.1 The Lady in the Lake by Nev Fountain
3.2 A Requiem for the Doctor by Jac Rayner
3.3 My Dinner With Andrew by John Dorney
3.4 The Furies by Matt Fitton

The Diary of River Song Series 03 will be released in January 2018, and is now available to pre-order from Big Finish at £23 on CD and £20 on download, with a download exclusive available for all CD purchases via the Big Finish app.