Big Finish Productions are now taking pre-orders for their special 50th Anniversary multi-Doctor story, which will see the Fourth, Fifth, Sixth, Seventh and Eighth Doctors all come together for the first time in the audio adventure.

‘The Light At The End’ will see them joined by companions Leela, Nyssa, Peri, Ace and Charley to try to unravel a deadly mystery involving the Doctor’s greatest foe, the Master, as he attempts to finally wipe the Doctor from the face of the universe. 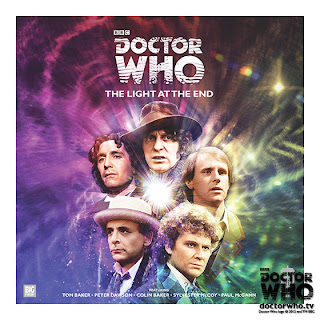 As well as standard and special edition CD versions, there will also be a limited run of 500 four-disc vinyl sets. The vinyl will contain both the adventure and a special ‘making-of’ documentary, and will be presented in a four-way gatefold sleeve with an exclusive lenticular image of all five Doctors together, as seen below.

The vinyl will undoubtedly prove to be a treasured collector’s edition in years to come, and alongside the CD versions is available to pre-order now from the online Big Finish store ahead of its scheduled November release.