In an recent interview, Doctor Who Producer Caroline Skinner talked about the return of the Cybermen in the penultimate episode of Series 7, The Last Cyberman.

“One of the things that Neil [Gaiman] was initially really excited about was being given one of the classic Doctor Who monsters and being able to bring a new twist and a new way of looking at them.

Certainly when we watched them on set they felt very creepy and the redesign of the masks recalls to a certain extent some of the earlier ‘Moonbase’/‘Tomb Of The Cybermen’ designs. What Neil’s also done in that episode is actually used the notion of being able to write a story about the Doctor in conflict with the Cybermen in a new way, to really make it a huge episode for Matt. It’s a brilliant performance, that one.”

“It’s interesting what Neil does – he always delivers such wonderful visual sequences, as he did with ‘The Doctor’s Wife’, but one of his real strengths is that he gets right to the heart of the characters as well. In many ways that episode is as much about Matt’s Doctor in conflict with one of the most classic and famous Doctor Who monsters as it is about what the Cybermen look like.” 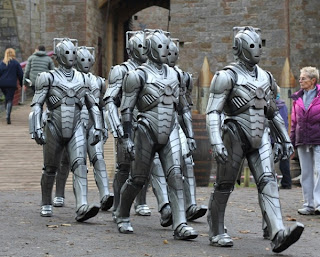