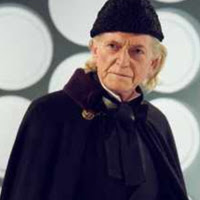 Fans are excited about the return of the first Doctor in this year’s Christmas special but what does actor David Bradley have to say about all this wibbly wobbly timey wimey stuff?

David Bradley first put on the iconic costume for the first Doctor when he portrayed legendary actor William Hartnell in An Adventure in Space and Time. He did such a brilliant job that he was asked to portray the first Doctor in this year’s Doctor Who Christmas special. Some fans may be wondering if this is the last we’ll see of Bradley’s portrayal of the legendary time lord. At this year’s MCM London Comic Con, when asked if he would ever return to the Whoniverse Bradley said “If they asked me, yes, I’d bite their hand off”. The actor admitted he enjoyed being part of both the biographical film as well as the Christmas special. He revealed that his recent filming on Doctor Who has been some of the most rewarding work he has done in his career, claiming that he will treasure it.

“It’s quite something, you never expect in your career – something you watched when you were young and never imagined you’d be involved in something so iconic. As I say, it’s a late treat!” – David Bradley

The actor is well known for his recent roles in Game of Thrones, Harry Potter and Broadchurch. When asked how he felt when he found out that his Broadchurch costar Jodie Whittaker would be playing the 13th Doctor he said he was “happily surprised”. Bradley continued, “I know that she’s got this great depth as an actress, anyone who saw Broadchurch saw the range that she had”.

Bradley told fans at MCM London Comic Con that Whittaker had a wicked sense of humour which he believes will help her in portraying the Doctor.

“And not only that, just hanging out with her you realise what fun she is, and she’s always up for a laugh. So she’s got everything needed for playing the part. I think she’ll be absolutely brilliant. So I was very excited when I saw she was doing it.” – David Bradley

Sadly the actors did not have the chance to work together during the filming of Twice Upon a Time, despite both having parts in the episode. Bradley explained, “They filmed her separately to appear at the end of our episode”. Bradley is looking forward to watching Whittaker take on this iconic role, but unfortunately he’ll just have to wait for the special to air, like the rest of us.

Bradley and Whittaker can both be seen in Twice Upon a Time this Christmas.