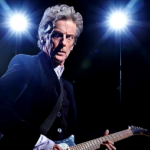 The latest issue of Radio Times, out today, features interviews with Peter Capaldi, Michelle Gomez and Steven Moffat ahead of the Doctor Who Series 10 two-part finale.

All three are set to leave Doctor Who this year – Peter Capaldi and Steven Moffat will both be bowing out after their final Christmas special, whilst Moffat confirms in the magazine that Michelle Gomez’s last appearance as Missy will be at the end of Series 10.

Capaldi, who describes his impending regeneration as being ‘more complicated’ than other recent ones, explains why he made the decision to leave after this series:

“I love this show, but I’ve never done anything where you turn up every day for ten months. I want to always be giving it my best and I don’t think if I stayed on I’d be able to do that. I can’t think of another way to say, ‘This could be the end of civilisation as we know it.’ With episodic television of any genre, the audience wants the same thing all the time – but the instinct that leads the actor is not about being in a groove.”

Gomez talks about how her take on the Master relates to Capaldi’s Doctor:

“I think there’s a throwback to the relationship between Roger Delgado’s Master and Jon Pertwee’s Doctor [in the early 1970s]. Then you could see there was history between them, and a mutual appreciation of each other’s wit and intellect. Missy harks back to that.”

Moffat, meanwhile, discusses how he will be handling his departure from the show:

“I’ll strike a balance between not revealing spoilers and trying to get people to watch. I’m honour-bound as a writer not to give a damn about my departure…it’s about giving Peter a grand, several stage finale and trying to refresh the story that Doctor Who gets involved in with a tremendous crisis, during which he gets in some way mortally injured and has to turn into another actor.”

The Series 10 two-part finale begins with World Enough and Time on Saturday 24th June at 6:45pm on BBC One, before concluding with The Doctor Falls, an extended hour-long episode on Saturday 1st July.


The full interviews with Peter Capaldi, Michelle Gomez and Steven Moffat can be found in the latest issue of Radio Times, on sale today in shops and via iTunes.