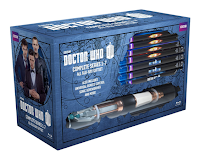 It’s been quite the week for Doctor Who merchandise. After the announcement of several new soundtracks and the Series 7 complete box set, a particularly major piece of merchandise has been announced.

The artwork listed is for North America and the box set is only up for pre-order in North America, but it has been confirmed that there will be a UK version with slightly different content and cover art.

For the first time ever, BBC Home Entertainment is collecting the complete new Doctor Who together on Blu-ray plus an amazing assortment of additional items including the totally unique Doctor Who Universal Remote Control Sonic Screwdriver and more!

The box set will be released this autumn, around the time of the release of the Series 7 box set in September.

Posted in News and tagged Merchandise