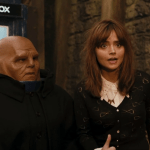 You’ve seen the overnight ratings (6.8 million) and the consolidated figures including 7 days of recordings (9.17 million) for Deep Breath – and now the Live +7 figure, including all viewings on all platforms during the week of broadcast, has been released.

The episode had 10.76 million Live +7 viewers, which included repeats and BBC iPlayer viewings up to 7 days after broadcast, on top of the live and timeshift (recorded) viewings. Few Live +7 figures are available for Doctor Who, but for comparison Series 7 opener Asylum of the Daleks had a Live +7 figure of 9.65 million.

On top of the 6.8 million viewers who watched it live on BBC One and the 2.5 million timeshift viewers (slightly larger than the timeshift reported in the initial consolidated figures), the episode had 970,000 unique viewers on iPlayer and 456,000 viewers from the multiple BBC Three repeats.

Further Live +7 figures are expected to be released next month for more Series 8 episodes.