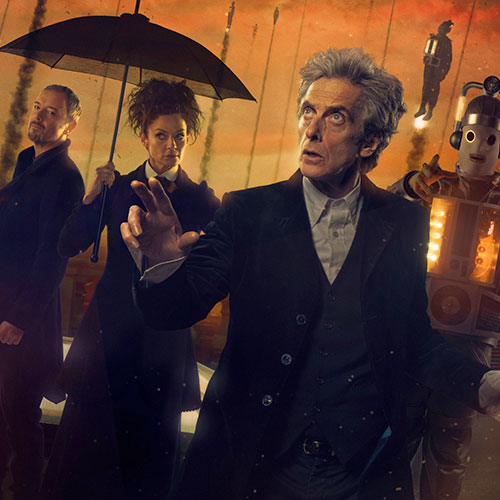 For the past week you’ve been voting in our rate the episode poll for The Doctor Falls. We’ve now closed the poll and you can view the results below:
Season finales have typically split the audience down the middle, but The Doctor Falls proved to be more crowdpleasing than most as it garnered an extremely positive response from our readers, even if it wasn’t quite as well-received as part one of the same story:
The episode had an excellent average score of 4.56/5, which puts it considerably above the scores achieved by the finales of Series 8 and 9. In our now-complete leaderboard for Series 10, it slots into second place:
Series 10’s most acclaimed episode, according to The Gallifrey Times readers, is the explosive penultimate instalment, World Enough and Time, as The Doctor Falls‘ entry into the silver spot means that the finale takes the top two spots. The top three is rounded out by another Steven Moffat entry, Extremis. When ranked together, the season averages out at 4.12/5.

With the series having wrapped up, it’s time to take a look at how it’s fared as a whole. It’s interesting to note that, despite the massive variance in responses, all three Capaldi seasons have landed in the same ballpark in terms of average scores – Series 8 on 4.19, Series 9 on 4.16, and Series 10 on 4.12. While that puts Series 10 as the lowest average for the Twelfth Doctor by a notch, the differences are basically negligible.
It’s notable that there was simply less of a range of scores for Series 10, with 1.14/5 between the top and bottom episodes, as opposed to 1.19/5 for Series 8, and 1.65/5 for Series 9 (which contained the least popular story of the whole era, Sleep No More), reflecting the general response to the season as less divisive, but with fewer highs.
The complete Capaldi era leaderboard, in which The Doctor Falls slots in third, between Face the Raven and The Witch’s Familiar, tells a similar story:
While Series 10 has just two episodes in the top ten, it also has a higher season low than the other seasons, with The Lie of the Land comfortably above In the Forest of the Night and Sleep No More, and a high concentration of episodes in the middle part of the leaderboard.
Series 10 also fares well when all three seasons are compared episode for episode in a ‘dream run’ (episode one versus episode one and so on):
Dream Series 8/9/10 Run
Four episodes of Series 10 make it into that ‘dream run’, compared to six for Series 10, and just two for Series 8, showing its consistency compared to other seasons.
Best Writer

Series 10 saw nine different writers all pen at least one episode, but who came out on top of the writers’ list?
In contrast to Series 9, everyone but Steven Moffat only wrote one episode, so it’s no surprise this leaderboard arranges itself like the episode leaderboard. It’s also no surprise that Moffat, who wrote the year’s top three episodes, comfortably tops the list, followed by fan favourite Jamie Mathieson and new face Mike Bartlett.
The Episode Categories
Using the results from Series 8, 9 & 10 it’s possible to work out a set of categories roughly denoting what level of reception each average score indicates. With that in mind, here’s where Series 10’s episodes generally sat (often, the category can mean two things):
4.5/5 and up – Fan favourite.
This is the highest category for an episode. If an episode breaks into this category, it’s both considerably acclaimed and not very divisive (with very few negative scores to bring the average down), indicating an episode that’s become an instant fan favourite. Series 10 lacked an episode in this category for almost the whole run, but then along came the two-part finale:

This is a narrower category than most, but several episodes of this era have slotted into this margin. This category indicates an episode that receives a substantial amount of praise and has done very well indeed, but with the caveat that there’s less outright love and/or a higher level of divisiveness than the fan favourite episodes. Just one episode of Series 10 slotted into this category:

This is a category that indicates a reception that’s predominantly positive with a majority of 4/5 and 5/5 votes, but the response is slightly more measured once more. This was a very common category in Series 8. Often, especially towards the lower end of this category, the amount of 4/5 votes can eclipse 5/5 votes. Six episodes, half the season, of Series 10 slotted into this category
3.5-3.9 – Mixed reception

There’s still plenty of positivity to go around in this category, but the responses here are divided, with a substantial amount of votes in the lower categories and a restrained amount of 5/5 votes. This indicates a mixed response of some kind, with too much divisiveness for a verdict to be had either way. Three episodes of Series 10 slotted into this category:
3.0-3.5 – Considerably divisive

This indicates a reasonably even spread of votes – a very mixed response with tepid levels of positivity. This is still mixed, but with far more negativity in there, indicating an episode that’s tipping into negative territory. No Series 10 episodes joined In the Forest of the Night here.

This category indicates a response that’s now generally negative – a thumbs-down verdict from TGT voters with a considerable amount of negativity. No Series 10 episodes joined Sleep No More here.