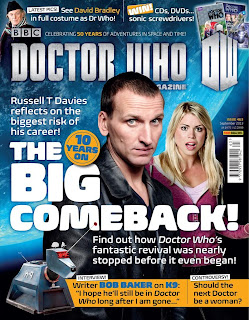 The latest issue of Doctor Who Magazine will be available to purchase from Thursday 25th July, and this issue features three different script extracts written by Steven Moffat, used in the audition process for the 12th Doctor. Readers should note that the scenes in these scripts do not reflect any future episodes of Doctor Who and will never appear in the show.

1. INT. TARDIS
The new Doctor is checking out the new body. Clara, watching. It’s been a few minutes, they’re both still adjusting.

2. INT. SPACE SHIP BRIDGE
The Doctor is facing down the Cyberleader, who stares balefully down from the screen. The bridge around the Doctor is burning, ruined.

THE DOCTOR: Ah, Cyberleader, hello!
CYBERLEADER: Do you have a response, Doctor.
THE DOCTOR: Yes, I do. Definitely got a response. And here it is. Yes, your ears look big in that! Sorry, did I misunderstand the question?
CYBERLEADER: You will return the stolen cargo.
THE DOCTOR: Yeah, well, two points. One, I didn’t steal it. No, actually, I did steal it, I was just hoping if I said that I’d think of a really good excuse before the end of the sentence. Didn’t happen, never mind. Point two – well, point one, second attempt – that isn’t cargo. Those are human beings.
CYBERLEADER: They are primed for conversion.
THE DOCTOR: I’ve unprimed them.
CYBERLEADER: You will return the cargo.
THE DOCTOR: No, I won’t.
CYBERLEADER: Then the cargo will be taken.
THE DOCTOR: Not going to happen, and do you know what’s going to stop you?
CYBERLEADER: We will not be stopped. The Doctor raises a finger.
THE DOCTOR: Tell it to the finger. See this finger? See what I’m doing with this finger right now. The Doctor moves to the screen. Starts drawing a line across.
THE DOCTOR: I’m drawing a line between this ship and you. Between all these people and all your metal men. And this line, it’s a magic line
CYBERLEADER: Magic is not logical
THE DOCTOR: I know – isn’t it great? Because I’ll tell you what. All these people on this ship are now, officially, under the protection of the magic line. Now, I’ll be honest, these guys in here are a bit annoying. They keep having their own opinions, and sometimes they take turns talking instead of me, which is just boring for everyone. But facts are facts, they’re behind the magic line, and that’s the way it is now. And to be clear, so we all understand the deal here, if any of your handle-heads happens to cross the magic line, even by accident, do you know what will happen to you then?
CYBERLEADER: What will happen?
THE DOCTOR: Me.

3. The Doctor and a little boy. They’re sitting in the little boy’s bedroom.