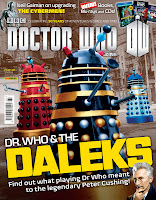 The details for Doctor Who Magazine issue 461 have been released, which you can read below:

CELEBRATE PETER CUSHING’S CENTENARY
“I only saw one episode of Doctor Who on TV, but I felt the character was unnecessarily harsh. I see him as a jolly old fellow – not sour at all!”

To mark the centenary of the legendary PETER CUSHING’s birth, as well as the release on DVD and Blu-ray of Dr Who and the Daleks and Daleks’ Invasion Earth 2150 AD in which he starred, DWM takes a look at the life of the man who was the big screen Dr Who…

THE CYBER-PLANNER
“I thought the coolest thing in the world would be writing Batman, and it absolutely was… until the point that I wrote Doctor Who.” NEIL GAIMAN tells us about writing the recent episode NIGHTMARE IN SILVER!

AND THE WINNER IS…
The votes are in for the 2012 Season Survey and the winners are revealed, including: Favourite Story, Best Director, Best Writer, and what was top of your wish list for the forthcoming 50th anniversary – as well as a chance to vote in our 2013 poll.

GOOD TIMING
Doctor Who’s top man STEVEN MOFFAT answers questions from DWM readers, including how he times the length of episodes, and how would he feel about an American version of Doctor Who?

PLUS! All the latest official news, TV and merchandise reviews, previews, ratings analysis, competitions, a prize-winning crossword and much, much more!

Posted in News and tagged Doctor Who Magazine