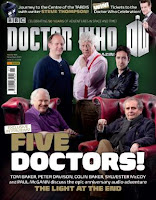 Doctor Who Magazine issue 465 is out now! The latest edition of the magazine features a discussion between five Doctors on the upcoming Big Finish audio, The Light At The End.

It’s very important to celebrate 50 years of Doctor Who, and it’s so exciting, too. It’s really nice that people treat you in a very loving and caring way, and they like to see you. And it’s great to come together with the other actors who played Doctor Who.

You’re guaranteed that… that energy, and that presence, and that sense of humour.

To have us all together is a kind of critical mass of uranium, that should produce something pretty explosive!

I think it’s very important that we do something to commemorate the 50th anniversary. It’s very nice to be a part of something that’s been running for 50 years and is still going strong.

In Waitrose, a certain kind of old lady finds me quite interesting…

Start with a Bang!

Doctor Who’s showrunner and head writer, Steven Moffat, answers DWM readers’ questions. So how and why did the TARDIS explode in The Pandorica Opens? Find out Steven’s reply in his exclusive column.

Deep, Deep Trouble:
The Third Doctor and Jo encounter creatures from the bottom of the ocean in one of the best-loved stories of the 1970s. Discover fascinating new facts and intriguing new insights into the adventure, as The Fact of Fiction digs beneath the surface of The Sea Devils!

Blockbusters:
DWM rolls back the clock to 2012 – five adventures, each of which could have been a movie! Stand by for action, as DWM takes a nostalgic look at a season filled with dinosaurs, Angels and Daleks as Countdown To 50 continues.

The Ride of a Lifetime?
The Doctor and Clara visit a futuristic amusement park – one which holds a horrifying secret beneath the veneer of fun. The terror behind the rides is revealed in a brand new comic strip, Welcome to Tickle Town, by Scott Gray with art by Adrian Salmon.

Change, my Dear…
Seasoned viewers of Doctor Who are used to the idea of the lead actor changing from time to time. But what’s it like from the perspective of a child? Jacqueline Rayner shares her experience of how her kids reacted to the announcement of Peter Capaldi as the Twelfth Doctor in Relative Dimensions.

Who’s on the Stage:
DWM talks to actor, comedian and dedicated fan Toby Hadoke about his candid interviews with the stars of the series, and the forthcoming West End double-bill of his acclaimed one-man shows, Moths Ate My Doctor Who Scarf and My Stepson Stole My Sonic Screwdriver.

Place Of Perfection?
The Time Team – Emma, Chris, Michael and Will – see the TARDIS take the Doctor, Martha and Jack into the far, far future. What will they make of the mysterious Professor Yana? And will they manage to find Utopia?

Speaking Double Dutch:
The mysterious Watcher provides an elegant explanation of rural accents, champions another Supporting Artist and challenges readers with the Six Faces of Delusion in the most unpredictable page in DWM: WOTCHA!

All the latest official news; DVD, CD and book reviews; the latest merchandise previewed; prize-winning crossword and competitions; and much, much more!

Posted in News and tagged Doctor Who Magazine, The Light At The End