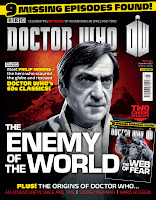 The details for Doctor Who Magazine issue 466 have been released, which you can read below:

DWM TALKS EXCLUSIVELY TO THE MAN WHO FOUND NINE MISSING EPISODES OF DOCTOR WHO: PHILIP MORRIS!

“It’s my job to put a smile on Doctor Who fans’ faces,” says PHILIP MORRIS, who recently discovered the film copies of The Enemy of the World and The Web of Fear, “in complete co-operation with BBC Worldwide. Doctor Who fans need to know that we are actively searching for material. So don’t lose hope!”

Plus: Missing episodes experts PAUL VANEZIS and PETER CROCKER explain their role in restoring these decades-old films to their former glory!

BACK TO THE BEGINNING…An exclusive preview of the new BBC Two drama, AN ADVENTURE IN SPACE AND TIME, which tells the story of the origins of Doctor Who and featuring an interview with DAVID BRADLEY, who plays William Hartnell, the actor who created the role of the Doctor.

FIRST DIRECTION
WARIS HUSSEIN, who directed the very first Doctor Who serial in 1963 talks exclusively to DWM, and reveals how he and the cast were able to overcome the limitations of the show’s tiny budget and create something that has lasted for 50 years.

THE GODFATHER
With excerpts from a previously unpublished archive interview, DWM presents a profile of SYDNEY NEWMAN, the man responsible for the birth of Doctor Who and for revolutionising TV drama production in the UK in the late 1950s and early 1960s.

GOODBYE AND WELCOME…
Doctor Who showrunner and head writer STEVEN MOFFAT writes exclusively for DWM and tells of the momentous day when outgoing Eleventh Doctor Matt Smith handed over the key to the TARDIS to incoming Twelfth Doctor – Peter Capaldi.

DO I HAVE THE RIGHT…?The Fourth Doctor is taken on a detour to the planet Skaro by the Time Lords and given the task of preventing the creation of his deadliest enemies, the Daleks. THE FACT OF FICTION takes a look at one of Doctor Who’s undisputed classics, GENESIS OF THE DALEKS, and unearths some new and fascinating facts about the 1975 six-part serial and its origins.

TOP OF THE POPSThe votes are in for the 2013 DWM readers’ Season Survey and the winners are revealed, including your favourite story, best guest stars, best writer, and favourite musical score!

NEVER ENDING STORY…
DWM’s journey through Doctor Who’s long history reaches its end with this year’s thirty-third series, in COUNTDOWN TO 50. We join the Doctor on his quest to solve the mystery of the impossible girl – his new companion, Clara, who he has already seen die twice. When the Doctor’s very existence is threatened by the Great Intelligence, Clara travels into the Doctor’s past to save his future…

A HAPPY ENDING?The Doctor and Clara uncover the dark truth behind the cartoon capers in the second and final part of the comic-strip adventure, WELCOME TO TICKLE TOWN, written by SCOTT GRAY with art by ADRIAN SALMON.

PLUS! All the latest official news, TV and merchandise reviews, previews, ratings analysis, competitions, a prize-winning crossword and much, much more!

Doctor Who Magazine issue 466 is out on Thursday (with two covers, for newly discovered serials The Enemy of the World and The Web of Fear), priced £4.75.

Posted in News and tagged Doctor Who Magazine