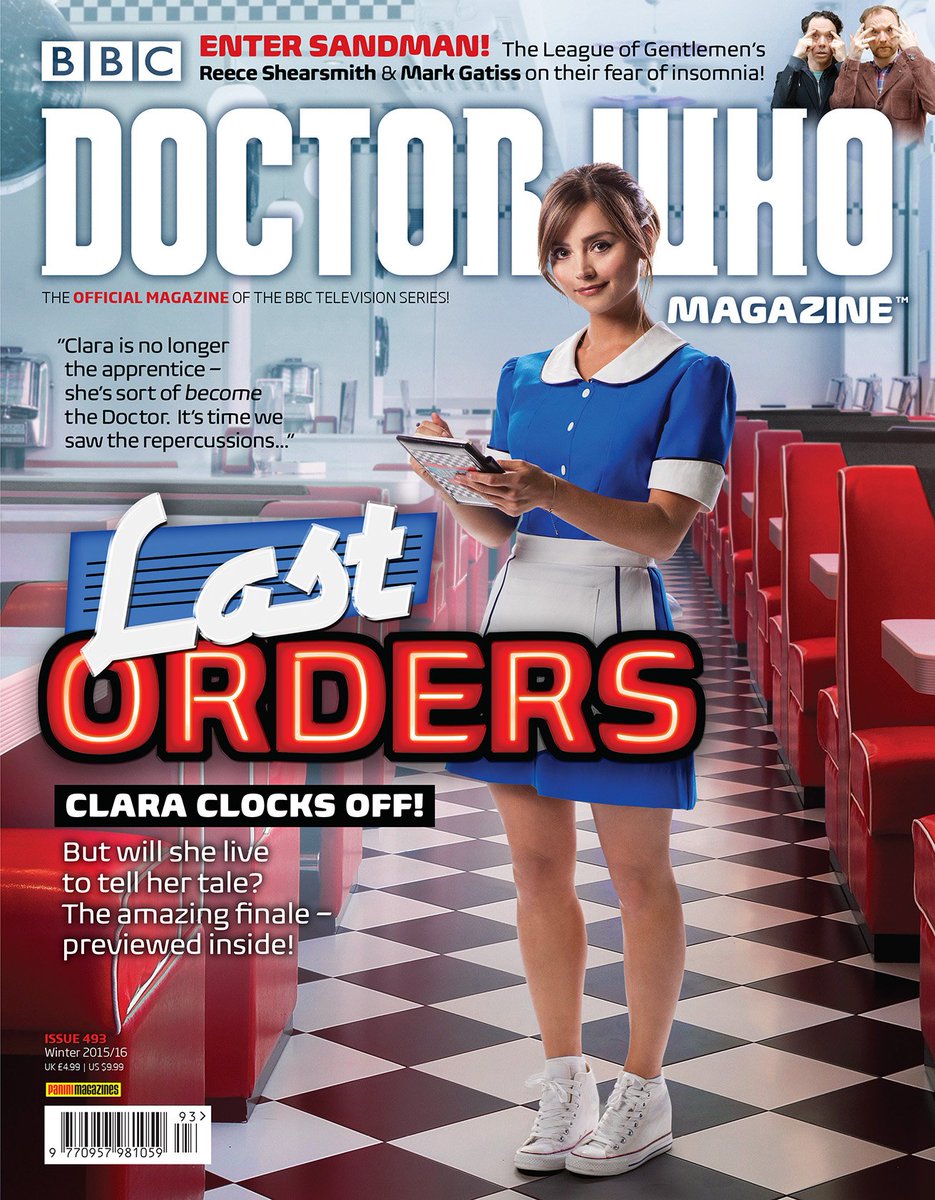 Full details have been released for the next issue of Doctor Who Magazine, which is released tomorrow and previews the final four episodes of the season. You can read the full details below:

Doctor Who Magazine looks ahead to the dramatic final episodes of the latest series – Sleep No More, Face the Raven, Heaven Sent and Hell Bent, and talks to to the writers of the episodes: Mark Gatiss, Sarah Dollard and showrunner Steven Moffat. We also catch up with the director of the series finale, Rachel Talalay and the Doctor himself, Peter Capaldi…

“The whole episode’s quite big,” Peter tells DWM of the 12th and final episode of the series, Hell Bent.  “It’s huge, actually – but also there’s a sadness, a romance, and a tragedy to Episode 12,” he says. “It’s just so romantic. It’s very effective. And I loved all the stuff on one particular set. I was very excited. It looks so modern – a Kubrick-y kind of vibe. It was very nice. We’re in a very interesting place, because we’re competing with bigger shows, frankly. Most American shows have four times the budget per episode that we have, but that’s what we’re up against. We’re competing with Game of Thrones… This is traditional for Doctor Who, but it goes to show what this amazing production team can achieve.”

INSIDE NUMBER 9
DWM reunites League of Gentlemen stars Mark Gatiss and Reece Shearsmith – writer and star respectively of Sleep No More – for an exclusive interview! Plus a chat with guest star Bethany Black.

BREAKING THE FOURTH WALL
Showrunner Steven Moffat answers readers’ questions, and reveals just who the Doctor is talking to when he’s looking directly at the camera…

IMMORTAL WORDS
Poll-winning writer Jamie Mathieson discusses his varied career, including his life as a stand-up comedian, and how his latest episode, The Girl Who Died, came to be.

HIGHWAY TO HELL
Writer Catherine Tregenna talks in-depth to DWM about how she came to write her recent Doctor Who episode, The Woman Who Lived.

BACK TO LIFE
Jacqueline Rayner explains why The Girl Who Died reminded her of the Moxx of Balhoon, her childhood and Dodo in Relative Dimensions.

TALES OF DARKNESS
The Doctor and Clara face terror in the cemetery in their latest terrifying comic strip adventure, The Highgate Horror, by Mark Wright, illustrated by David A Roach.

THE DWM REVIEW
DWM reviews The Girl Who Died, The Woman Who Lived, The Zygon Invasion and The Zygon Inversion. Plus, the latest DVDs, books and audios are put under the spotlight.

COMING SOON
All the latest and forthcoming Doctor Who CDs are previewed – including UNIT: Extinction and Jago & Litefoot & Strax!

PLUS! All the latest official news, competitions, ratings round-up, Wotcha! and The DWM Crossword.