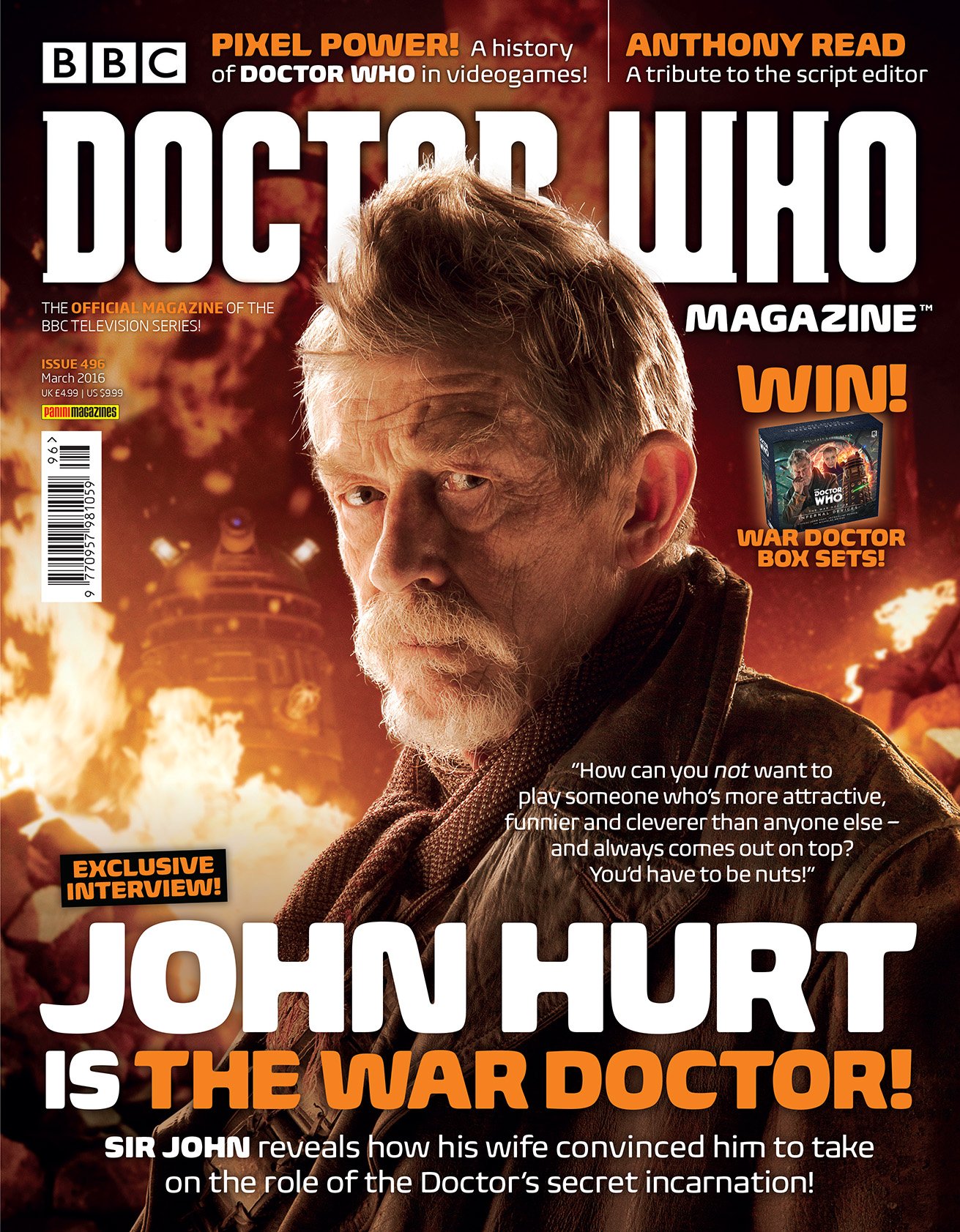 Details have been released for the latest issue of Doctor Who Magazine, which is out now, featuring John Hurt’s War Doctor as the cover story:

Issue 496 of Doctor Who Magazine exclusively interviews Sir John Hurt, who played the mysterious incarnation of the Doctor in 2013’s 50th Anniversary Special The Day of the Doctor – and asks him about his return in his brand new Doctor Who audio series.

What was John’s first reaction when he was offered the part of the Doctor’s secret incarnation?

Well, I said, ‘Doctor Who? I don’t think that’s really my sort of stuff.’ But my wife was listening, and when she heard that it was the 50th anniversary, she said, ‘You’ve got to be f***ing joking! You’re doing it! So I’ve really for her to thank. I’m really pleased I did it, because it opened up a whole new era for me. A whole new era.

On returning to the role for Big Finish’s audio adventures, Hurt explains:

I was often asked, ‘Are you going to do anymore? And I said, ‘Well, I don’t think so. I’m not ruling it out, but unless somebody comes up with a real stonker of an idea that would involve him again… But the thing is that you can’t plan careers. You think, ‘That’s the way to play it’, but it’s not necessarily the case at all. If you follow your nose, that’s often the way to play it. And that’s exactly how I feel about this. I mean, I really have enjoyed every second of it. I mean it.

ALSO INSIDE ISSUE 496…
ASK STEVEN MOFFAT
Doctor Who showrunner Steven Moffat answers readers questions about some of the show’s most recent episodes…
THE WAR DOCTOR ON AUDIO
The writers of the exciting new audio series chat about writing for the Doctor’s most dangerous incarnation.
A TRIBUTE TO ANTHONY READ
Doctor Who Magazine pays tribute to the late Doctor Who writer and script editor, who died in 2015, with contributions from his colleagues and previously unpublished quotes from interviews conducted in 1990 and 2008.
PIXEL POWER
Following the recent success of Lego Dimensions and Doctor Who Legacy, we uncover three decades’ worth of Doctor Who videogame projects.
NEVER FORGET?
The Time Team continue their quest to watch every episode of Doctor Who in order with Matt Smith’s second story, The Beast Below.
WELCOME MY DEMONS
This issue’s Fact of Fiction delves into the world of King John and Magna Carta in the 1983 Fifth Doctor story The King’s Demons.
A TRIP TO THE THEATRE
The Doctor meets his old friend Harry Houdini and encounters some trouble at the theatre in a brand-new comic strip adventure, Theatre of Mind, written and illustrated by Roger Langridge.
STAR WARS vs DOCTOR WHO
Jacqueline Rayner wonders if it’s possible to enjoy Star Wars: The Force Awakens without feeling like you’re cheating on Doctor Who, in her regular column, Relative Dimensions.
COMING SOON
DWM previews all the latest Doctor Who CD and book releases.
PLUS! All the latest official news, reviews, competitions and The DWM Crossword.