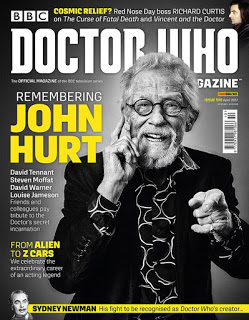 The latest issue of Doctor Who Magazine, out this week, pays tribute to the extraordinary career of John Hurt, who sadly passed away in January at the age of 77.

Among those sharing their memories of Hurt, who memorably made his Doctor Who debut as the War Doctor in 2013 before joining Big Finish for more adventures, are David Tennant, Steven Moffat, David Warner and Louise Jameson.

“It doesn’t need saying – John Hurt was one of the greatest actors who ever lived. That’s not even controversial, that’s just a fact. I only met him a handful of times, but I can confirm the other thing that everyone else has been saying about him: he was also incredibly nice. Now, nice doesn’t seem like much of compliment, but you have to remember that this man was, quite rightly, worshipped by everyone he met. Worship has been known to go to people’s heads – but not John’s. If a man can remain humble and kind and warm as the world basically genuflects around him, then that is no ordinary man. The Doctor would be proud to be John Hurt – and for one very special day, he was.”

As well as the usual reviews, previews and features, this month’s issue of Doctor Who Magazine also includes:

Doctor Who Magazine #510 will be available to buy from Thursday 9th March, price £5.99.