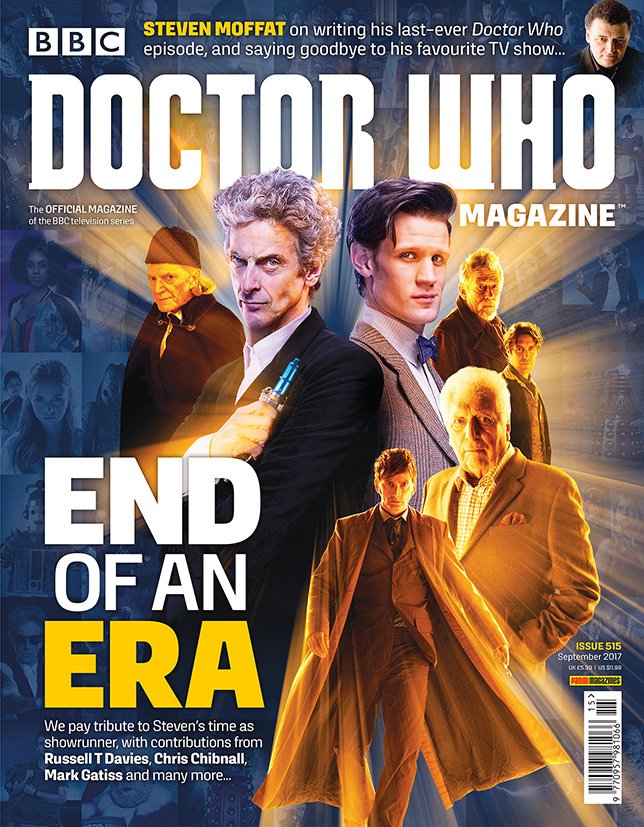 Doctor Who Magazine have revealed their cover for issue 515, featuring every one of the Doctors featured in Steven Moffat’s era, including the Curator played by Tom Baker, John Hurt’s War Doctor and the First Doctor, played by David Bradley in the upcoming Christmas Special.

Inside, there’s a tribute to Steven Moffat’s tenure as showrunner, and his final production notes on the era. As the editor has pointed out on Twitter, there’s no reference to Jodie Whittaker’s new Doctor on the cover as is customary because the issue was sent to the printers before the reveal.

Here’s an excerpt from the Moffat interview to whet your appetite:

With his last episode due to air at Christmas, we asked Doctor Who‘s head writer and showrunner Steven Moffat if he ever thought, back in 2004, when he wrote The Empty Child, that he’d still be writing for the series in 2017?

“No, God, no!” he exclaims. “God, no! I also didn’t think I’d do the showrunning job for more than three years, and I’m here after six series. Yes, I’ve been writing Doctor Who stories since 2004. That’s a hell of a long time. When I wrote The Empty Child/The Doctor Dances, I wondered if I’d ever write another Doctor Who story. I was very keen to, I really wanted to. I remember asking, ‘Would you have me back next year…?’”

So what’s next for Steven after he finishes with the Doctor? He’s staying tight-lipped.

Also inside the issue:

Posted in News and tagged Doctor Who Magazine, Steven Moffat