A special edition Doctor Who coin that was previously only available in New Zealand is now available to purchase via the BBC Shop. It is priced at £99.99, but fans can currently claim a 10% discount with the code DOCTOR1. 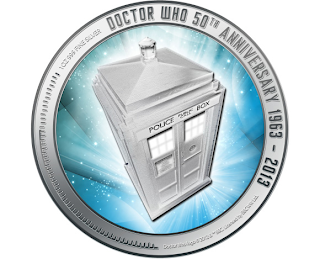 Produced exclusively by the New Zealand Mint, the $2 denomination silver coin has a limited run of 10,000, and will be shipped in a special edition TARDIS packaging. The reverse depicts an engraved relief of the TARDIS on a colour-printed background, and the obverse features the Ian Rank-Broadley effigy of Queen Elizabeth II, the 2013 year date and the monetary denomination of the coin.
The packaging makes the distinctive sounds of the TARDIS when opened to display the coin itself and the certificate of authenticity, making it a treasured collectible for any Doctor Who fan. 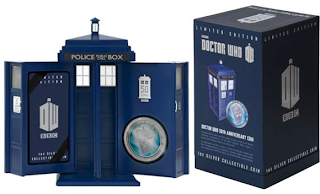 Rachael Hammond, the BBC Worldwide Senior Licensing Executive, explained how pleased she is that the New Zealand coin is now available to UK fans as well.

“We are thrilled to be partnering with New Zealand Mint on this global deal. It is an historic year for the Doctor Who brand, and we are pleased to be able to bring this unique product to Doctor Who fans and coin collectors alike.”

“I grew up watching Doctor Who as a child in New Zealand which, coincidentally, was the first country outside the UK to screen the show. It’s a great honour to now be asked to produce these coins to celebrate the 50th anniversary. Fans are going to really like what we’ve come up with.”