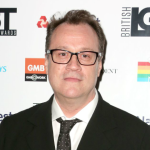 Former Doctor Who showrunner Russell T Davies has revealed that the new Doctor has been cast.

The writer disclosed the news on the AndyVision YouTube channel during an interview at the British LGBT Awards.

When asked about a potential replacement for Peter Capaldi – who is leaving the show after this year’s Christmas special – Davies said:

“Having worked on it, I’m leaving it to them. It’s like me asking you about the job you did five years ago.

Although characteristically evasive when pressed for further details, Davies hinted that the new Doctor will be younger than Capaldi – not a huge surprise, perhaps, considering that Capaldi is the oldest Doctor to play the role regularly since William Hartnell’s original incarnation.

No official announcements from the BBC have yet been made confirming the casting of the new Doctor, but following this latest tease from Russell T Davies – and with this year’s Christmas special due to start filming very shortly – it may not be too much longer until we finally learn who will be taking over the TARDIS once Peter Capaldi bows out.