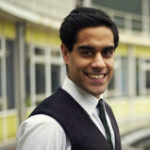 Sacha Dhawan (Sherlock) has revealed that he would be interested in taking on the role of The Doctor once Peter Capaldi steps down from the role at the end of this year.

The actor is one of several to have been linked to the role in recent weeks, with other rumoured names including Tilda Swinton, Olivia Colman and Kris Marshall.

When asked by Radio Times if he’d consider playing The Doctor’s next incarnation, Dhawan replied:

“Oh my God, I’d absolutely love to. I SO would love to.

“I’ve worked with [Doctor Who writer Mark Gatiss] quite a lot, and I think I’d bring something really exciting to it. It’d be incredibly nerve-wracking to do to be honest. It’s quite a lot of pressure.

“When the list came out, I was so honoured really that I was even considered. And that alone was kind of good enough. But who wouldn’t want to do it? It’s Doctor Who.”

If cast as the Thirteenth Doctor, Dhawan would be no stranger to the world of Doctor Who, having previously starred as director Waris Hussein in Mark Gatiss’ 50th anniversary docudrama An Adventure in Space and Time.

However, despite his eagerness to take on the role, Dhawan believes that in fact it’s now time for a woman to play The Doctor:

“I think generally with Doctor Who, whether it’s of race or of gender, I think it’s time that we celebrate that it should maybe be something different.”

“I don’t know what the answer is – I guess it’s the right person for the job. But I think it’s time to flip the character on its head slightly – and I feel that’ll very much happen this year, whether or not it’ll be someone of race or gender.

“I personally think maybe it should be a female now. I’m keen to see what the Beeb do.”

Doctor Who returns for Peter Capaldi’s final full series with The Pilot on Saturday 15th April on BBC One.