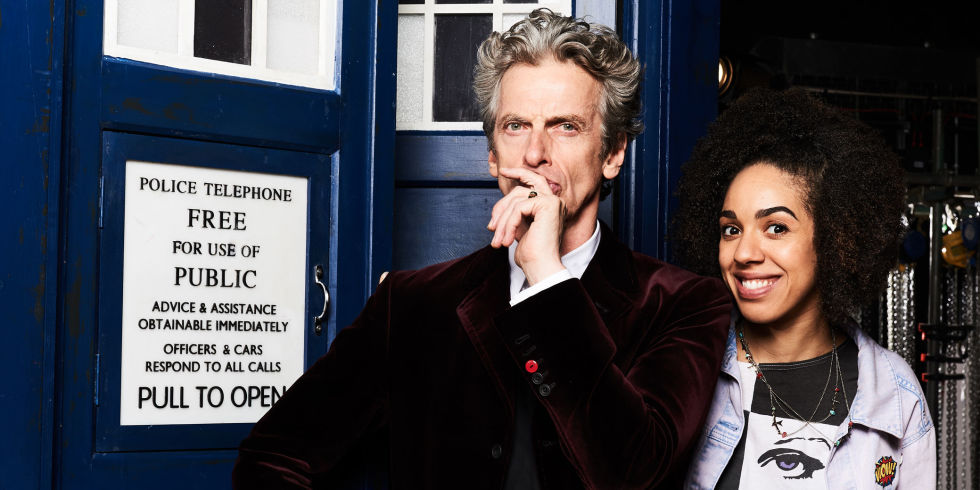 Series 10 of Doctor Who won’t air until 2017, but filming has been underway for a while now for the run of episodes that will mark the introduction of Pearl Mackie as new companion Bill, and filming has been public enough to give us a small glimpse into how the tenth series since the revival in 2005 will shape up.
With that in mind, here is our traditional, comprehensive episode guide for the series ahead, which will be updated regularly throughout filming as more writers, directors and guest stars are confirmed leading up to the spring premiere date.
Warning: This post may contain some minor filming spoilers, so click away if you don’t want to know anything about the upcoming series!

Updated on 5th April.
EPISODE ONE – THE PILOT What’s it about? The season opener marks the introduction of Pearl Mackie as new companion Bill to the show, as well as the re-introduction of Matt Lucas as Nardole, who will be a regular presence throughout the series. for the story, it looks as if the Doctor might meet Bill in a university setting, with signs up for St Luke’s University in Bristol, where an alien menace that possesses certain people begins to infect the campus through water. The Doctor will be a professor at the university who Bill, a canteen worker who sneaks into lectures, will collide with.

The episode will also incorporate a retooled version of the clip used to introduce Bill as the new companion, Friend from the Future, which means that, as with the short, the Daleks will appear here in a wartime setting. From the looks of it, however, this will not be the main plot of the episode and instead looks like a cutaway scene. 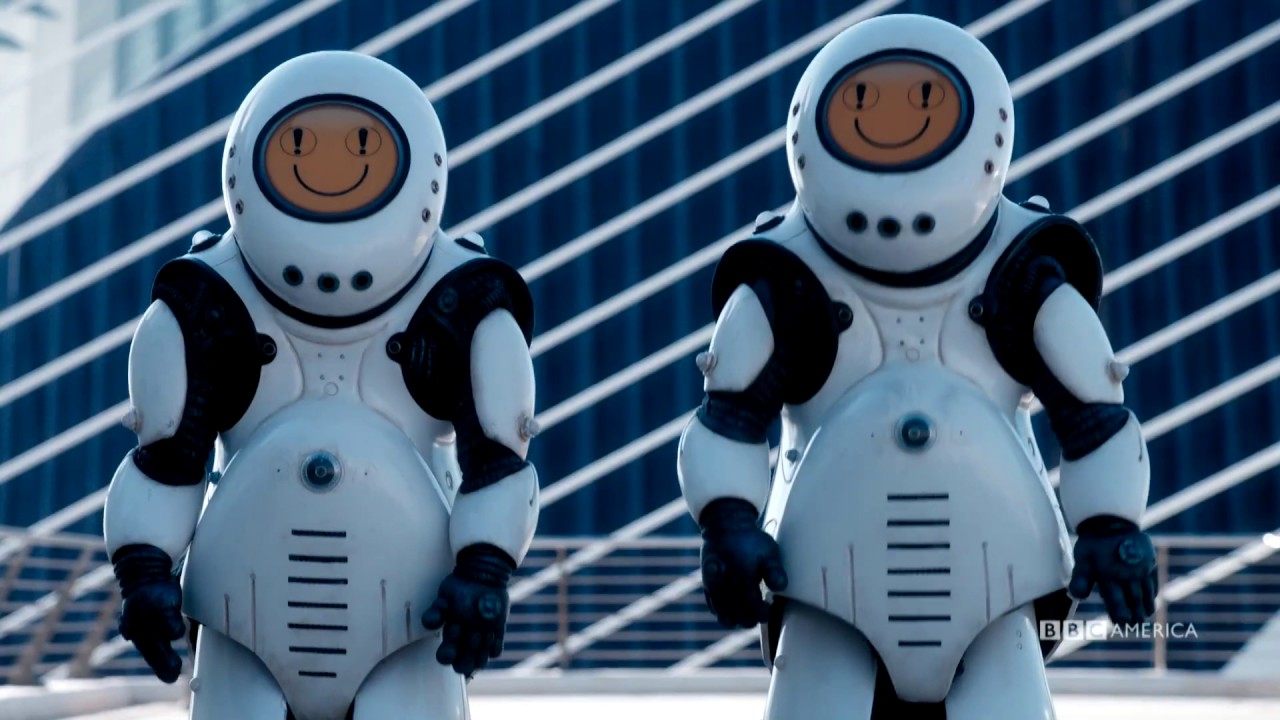 What’s it about? Episode two, rumoured to be titled Smile, will be set either in the far future or on an alien planet, which is represented by the Valencia Science Museum where the show filmed on location. The bad guys here are the ‘Emojibots’ (it’s unclear whether this is just a nickname that they’ve been given or their real name), robots with smiley faces who turn people to skeletons. Some of the vistas from the first trailer indicate a setting reminiscent of the movie Tomorrowland, with a futuristic city enclosed inside a cornfield.

What’s it about? Working with the formula set in stone back in Series 1, episode three, Thin Ice, will be a historical episode, set in Regency-era England during a wintery ‘Frost Fair’ (celebrations that occurred regularly during Britain’s unusually cold Little Ice Age period) where the Thames has frozen over. Underneath the frozen river lurks a giant serpent monster of some kind, whom the Doctor and Bill will don old-school metallic diving suits to confront.

What’s it about? Knock Knock, previously rumoured to be titled The Haunted Hub, looks to be a classic haunted house story partially set in a manor where we’ll find out what lurks under the floorboards. This episode features creepy wooden monsters, and rumours indicate that some giant woodlice will also be making a lovely cameo. As ever, episode four seems to be the spooky one.

Guest stars: David Suchet, famous for his role as Agatha Christie’s detective Poirot in numerous adaptations, stars as the Landlord.

Written by: Jamie Mathieson
Directed by: Charles Palmer
Filming block: Block Four, filmed October-November
What’s it about? Jamie Mathieson has called Oxygen a “taut thrill ride, a pitch black satire, a gag fest”, while Steven Moffat has praised its fear factor. Plot details, however, are thin on the ground. It’ll definitely involve a space setting with the old reliable orange jumpsuits in action, and the guest cast appears to comprise a spaceship crew, of which one is a blue alien (who you can see confronting Bill there).
Guest cast: Beowulf‘s Kieren Bew as Ivan, Peter Caulfield as Dahhren, the blue alien in question, Karen Breyben, Justin Salinger and Mimi Ndiweni, who seem to be the line-up of the space crew who’ll confront the Doctor, Bill, and Nardole.
EPISODE SIX – EXTREMIS

Written by: Steven Moffat
Directed by: Daniel Nettheim
Filming block: Block Five, filmed November-December
What’s it about? Here’s where things get a bit hard to untangle. The second half of the season was filmed much more quietly with fewer announcement, so it’s harder to clearly mark which bits belong to which episode. What we know for sure is that this episode is called Extremis, that it features the return of Michelle Gomez as Missy, that it involves Catholic priests, as seen in the trailer, and that parts are set at the Swiss particle accelerator, CERN. The specifics of how that all slots together are unclear, and it gets more uncertain when you look at the next episode. Since it’s penned by Moffat, however, it can be surmised that it’s of importance to the season arc.

We now know that this is part one of a three-part story arc that spans all the way to episode eight, featuring the new Truth Monks as villains! In all likelihood, it seems it’ll be three interconnected adventures with the same antagonist as opposed to a fully serialised story, but time will tell.

Guest cast: Michelle Gomez is back, and other guest stars include Laurent Maurel and Corrado Invernizzi as Cardinal Angelo, who seems to be comforting the Doctor in the above picture.
EPISODE SEVEN – THE PYRAMID AT THE END OF THE WORLD

Written by: Peter Harness
Directed by: Daniel Nettheim
Filming block: Block Five, filmed December-January
What’s it about? Unclear. Filming for The Pyramid took place in Tenerife, used for The Magician’s Apprentice and The Witch’s Familiar as Skaro (other Canary Islands, Fuerteventura and Lanzarote, have been used as Gallifrey and the Moon in Hell Bent and Kill the Moon), and as the picture above shows, it involves United Nations Peacekeepers and the Secretary-General – so don’t expect an alien planet! As the middle part of the big mid-season arc, the Truth Monks will once again rear their heads here.
EPISODE EIGHT – THE LIE OF THE LAND
Written by: Toby Whithouse
Directed by: Wayne Yip
Filming block: Block Six, filming January/February
What’s it about? Quite a lot of The Lie of the Land, the concluding part of the three-parter filmed on location in Cardiff, allowing us a substantial insight into the story. It’ll once again feature those pesky Truth Monks, who work in conjunction with armoured ‘Memory Police’. Several signs reading ‘TRUTH’ have been spotted around filming, too, which could suggest some kind of dystopian setting where specific ‘facts’ are enforced. Does this seem familiar to anyone?
EPISODE NINE – THE EMPRESS OF MARS 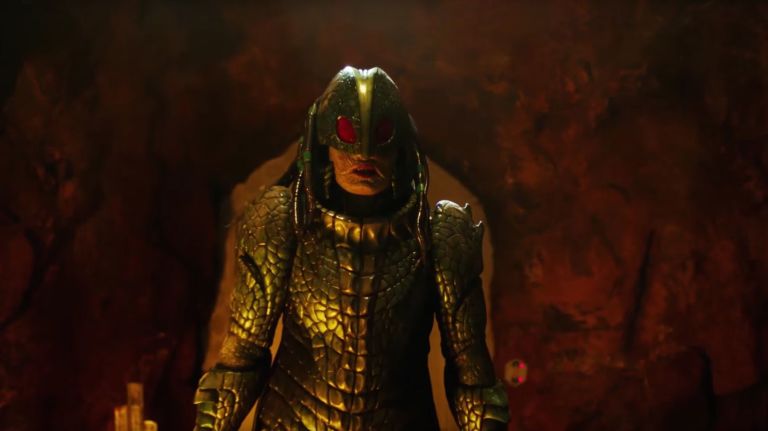 Written by: Mark Gatiss
Directed by: Wayne Yip
Filming block: Block Six, filmed January-February
What’s it about? Mark Gatiss’ customary episode, The Empress of Mars is bringing back the Ice Warriors, whom he revived in 2013’s Cold War, this time for an adventure to their homeworld, Mars. We’ve been promised a new kind of Ice Warrior, which, from the looks of the glimpse in the teaser above, could be a female variation of the species. The episode will also feature Victorian soldiers who’ve somehow made their way to the Red Planet, Jules Verne-style spacesuits, and a giant drill. Make of that what you will.
EPISODE TEN – THE EATERS OF LIGHT

Written by: Rona Munro
Directed by: Charles Palmer
Filming block: Block Four, filmed October
What’s it about? Originally slated for episode nine until it was switched with Gatiss’ episode, The Eaters of Light sees the return of classic series writer Rona Munro, whose last story came all the way back in 1989 with Survival. The episode seems to be set in the past in rural Scotland, and it’ll feature Roman soldiers – specifically the legendary Ninth Legion, who vanished without a trace in the first century.
EPISODES ELEVEN & TWELVE – THE FINALE

Written by: Steven Moffat
Directed by: Rachel Talalay
Filming block: Block Seven
What’s it about? Episodes eleven and twelve will comprise a two-part finale, and the big headline here is the return of the Mondasian Cybermen – the very original model of the metal monsters from Earth’s twin planet who appeared in First Doctor serial The Tenth Planet. To back them up, filming has also revealed that the Cybus Cybermen from Rise of the Cybermen and the new model of Cybermen from Nightmare in Silver will appear. Set reporters have indicated that the finale will be set in a post-invasion dystopia where the Cybermen are using hospitals to convert humans. On top of that, there’s the return of Michelle Gomez as Missy to unpack!
That’s it for Series 10, which will air as an uninterrupted run of twelve episodes from Saturday 15 April. It’ll be followed by a Christmas Special which will see the final appearance of Peter Capaldi as the Twelfth Doctor, and the last episode written by Steven Moffat as head writer. We’ll update this with more news when the traditional titles and more detailed previews come in in the next few weeks.