Doctor Who series 8 is imminent – with Peter Capaldi’s era as the Twelfth Doctor beginning on Saturday 23rd August with Deep Breath, information is coming in thick and fast.

So with all the writers and directors confirmed, how is Peter Capaldi’s first series as the Doctor shaping up? Here’s our complete, comprehensive guide to the 12 episodes that will make up series 8…

Some spoilers mostly seen in filming may be found below – if you don’t want to be spoiled, proceed with caution.

Written by: Steven Moffat
Directed by: Ben Wheatley
Filming block: Block One (with episode 2), filmed January
What’s it about? Peter Capaldi’s first episode is set in Victorian London, and sees the return of Vastra, Jenny & Strax. Filming has suggested that the Clockwork Droids from The Girl in the Fireplace may return in a new form, and will be the villains of the episode. Clara will have some difficulty getting used to the very different Twelfth Doctor over the course of at least this episode. Deep Breath is extended, running at around 75 minutes, and will be shown in cinemas on 23rd August.
Guest stars: Aside from Vastra, Jenny & Strax, the episode will also see the return of Inspector Gregson (first seen in The Snowmen prequel Vastra Investigates), played by Paul Hickey. The villain of the episode will be the Half-Face Man, played by Peter Ferdinando.
EPISODE TWO – INTO THE DALEK

Written by: Phil Ford & Steven Moffat*
Directed by: Ben Wheatley
Filming block: Block One (with Deep Breath), filmed February
What’s it about? Into the Dalek is said to see the Doctor and Clara shrunken down and piloting a Dalek, according to rumours (this fits in with Moffat’s tease that the Doctor will be going to ‘the last place in the universe he should be’). The episode was filmed entirely in studio, so no filming has been seen. The episode features a chained up Dalek, who will speak to the Doctor.
Guest stars: Michael Smiley plays Colonel Blue, and Ben Crompton plays Ross. Given the episode has been confirmed by Moffat himself to include Daleks, Nicholas Briggs will once again be lending his voice to the pepperpots. The episode also introduces Samuel Anderson’s Danny Pink.
EPISODE THREE – ROBOT OF SHERWOOD

Written by: Mark Gatiss
Directed by: Paul Murphy
Filming block: Block Three (with episode 6), filmed April
What’s it about? Robot of Sherwood sees the Doctor and Clara meeting Robin Hood and his Merry Men. Filming saw a spoon/sword fight between the Doctor and Robin Hood (no prizes for guessing who wields the spoon), a tournament, the Sheriff of Nottingham, some robotic-looking knights and a golden arrow. Other rumours have suggested that the whole scenario is an amusement park attraction with Robin Hood simply being a robot, but aside from a couple of lines in filming these rumours are unconfirmed. It’s about being a hero, and takes place while the Doctor is wondering whether he is a good man.
Guest stars: Two big-name guest stars in the form of Tom Riley (Da Vinci’s Demons) as Robin Hood and Ben Miller (Primeval, The Armstrong & Miller Show) as the Sheriff of Nottingham. Rounding out the classic Robin Hood characters, Trevor Cooper plays Friar Tuck, and Ian Hallard plays Alan-a-dale.
EPISODE FOUR – LISTEN

Written by: Steven Moffat
Directed by: Douglas Mackinnon
Filming block: Block Two (with episode 5), filmed March
What’s it about? Listen sees the Doctor having a ‘mild nervous breakdown’. There’s very little CGI, and one of the opening shots sees the Doctor perched on top of the TARDIS… in space. The monster will be mostly invisible, as revealed on the World Tour.

Written by: Steve Thompson & Steven Moffat*
Directed by: Douglas Mackinnon
Filming block: Block Two (with episode 4), filmed March
What’s it about? Time Heist sees the Doctor and Clara on an alien planet, going up against ‘the most secure bank in the universe’. run by the mysterious and evil Ms Delphox. Filming saw cyborgs, colourfully dressed extras and a high-tech bank lobby. It also features the odd monster above (previous updates to this episode guide presumed that this monster featured in episode 4 due to filming for the episodes being double-banked), and features a heist (as you’d imagine), Doctor Who style.
Guest stars: Keeley Hawes (Line of Duty) plays villain Ms Delphox, with Jonathan Bailey and Pippa Bennett-Warner also guest starring.
EPISODE SIX – THE CARETAKER

Written by: Gareth Roberts and Steven Moffat*
Directed by: Paul Murphy
Filming block: Block Three (with episode 3), filmed March/April
What’s it about? The Caretaker is set in Coal Hill School where Clara and Danny teach, and sees some strange goings-ons in Coal Hill, which the Doctor investigates disguised as a caretaker. Filming also saw an owl-like robot. A new guest companion (according to rumours), Courtney, will be introduced, who is rumoured to be the sister of Danny Pink. Courtney will also appear in episode 7.
Guest stars: Ellis George plays Courtney, with Samuel Anderson again appearing (naturally for an episode in Coal Hill). Jimmy Vee, who played Bannakaffalatta in Voyage of the Damned, also guest stars as owl-like robot Scovox.
EPISODE SEVEN – KILL THE MOON

Written by: Peter Harness
Directed by: Paul Wilmshurst
Filming block: Block Four (with episode 8), filmed May
What’s it about? Kill the Moon was partially filmed on the island of Lanzarote and sees a return to the location of an old adventure, with sinister changes since the Doctor’s last visit’. This location is almost certainly the Moon, as the episode title indicates. Filming saw the Doctor, Clara and Courtney in orange spacesuits, and locations which ranged from beaches to a volcano. It features Moffat’s favourite scene in the series.
Guest stars: Hermione Norris (The Crimson Field) is the episode’s main guest star, with Ellis George making her second (and as far as we know) final appearance as Courtney. Tony Osoba, who appeared in classic Who stories Destiny of the Daleks and Dragonfire, will also appear.
EPISODE EIGHT – MUMMY ON THE ORIENT EXPRESS 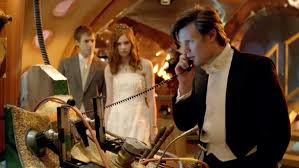 Written by: Jamie Mathieson
Directed by: Paul Wilmshurst
Filming block: Block Four (with episode 7), filmed May-June
What’s it about? Mummy on the Orient Express will see the Doctor ‘finally catching up on his phone calls’, according to Steven Moffat. Though the episode was filmed indoors, rumours have suggested that the Egyptian Goddess loose on the Orient Express teased at the end of The Big Bang (as seen above) will be appearing in this episode. Moffat’s comments in SFX that the episode features a callback to something from Series 5 corroborates this. The episode will also feature singing, and a ‘sparkling script’.
Guest stars: Comedian and superfan Frank Skinner will be appearing, as well as singer-songwriter Foxes, who will be performing a song specially recorded for the episode.
EPISODE NINE – FLATLINE

Written by: Jamie Mathieson
Directed by: Douglas Mackinnon
Filming block: Block Five (filmed on its own), filmed June
What’s it about? Flatline sees the TARDIS shrinking (as seen above) for some unknown reason. Filming also saw a group of people on community service, Clara with the Doctor’s sonic and graffiti of people with their backs turned in a tunnel. Moffat describes it as a horror story, with a ‘neat visual gag’ (likely to be the shrinking TARDIS). An interview with Peter Capaldi revealed that Flatline sees the Doctor and TARDIS shrunken down to miniature size, with Clara forced to carry them around.
Guest stars: The episode’s guest cast includes Christopher Fairbank, Joivan Wade, Raj Bajaj, Matt Bardock, Jessica Hayes, James Quinn and John Cummins.
EPISODE TEN – IN THE FOREST OF THE NIGHT

Written by: Frank Cottrell Boyce
Directed by: Sheree Foxton
Filming block: Block Seven (filmed on its own), filmed July-August
What’s it about? In the Forest of the Night has been described by Moffat as a fairytale, though not Moffat’s style of fairytale (look to Series 5 to see Moffat’s fairytale storytelling). The episode features several children, Danny Pink, a mysterious forest and wolves.
Guest stars: Several child actors will appear – Harley Bird, Abigail Eames, Ashley Foster and Jaydon Harris-Wallace. No other actors have been announced.
THE FINALE – DARK WATER/DEATH IN HEAVEN

Written by: Steven Moffat
Directed by: Rachel Talalay
Filming block: Block Six, filmed June-July
What’s it about? A two-part finale (the first since Series 5), Dark Water and Death in Heaven see the return of the Cybermen in their Nightmare in Silver form. The episode will also see the return of Kate Stewart and Osgood from The Day of the Doctor, a graveyard where headstones for several former characters such as Amy & Rory were seen, and a mysterious realm called the Nethersphere. The two-parter is rumoured to feature the Cybermen converting the souls of dead people for a full-scale alien invasion of Earth. Filming took place in London for a day, and saw a recreation of the famous scene with the Cybermen from Second Doctor story The Invasion.

Guest stars: Michelle Gomez stars as the Gatekeeper of the Nethersphere (which is believed to have something to do with the dead), and Jemma Redgrave and Ingrid Oliver are back as Kate Stewart and Osgood respectively (the two-parter has a big UNIT presence). Vastra, Jenny & Strax have been rumoured to be back in episode 11 for a Victorian portion of the story, but this has not been confirmed.
That’s all for Series 8, which will have a run of twelve episodes as opposed to the usual thirteen, but will air as a full series (and with Deep Breath running to 75 minutes, the series is only 15 minutes or so shorter than a normal series). A Christmas Special is expected to follow Series 8, and will be filmed in September.
We’ll keep this post updated as more titles and information on episodes come in!
*These episodes are joint credited, with Moffat’s credits believed to be hands-on work establishing the personality of the new Doctor in the first few episodes (note the co-writers are all before the halfway mark). These are likely rewrites from Moffat, similar to the joint-credited 2009 specials.