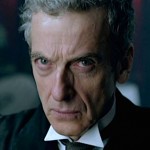 In eager anticipation of brand new Doctor Who, the Gallifrey Times team are revisiting Peter Capaldi’s debut season as the Doctor. We’ll be covering an episode a day from ‘Deep Breath’ to ‘Last Christmas’, the perfect build up to ‘The Magician’s Apprentice’ on September 19th.

Peter Capaldi begins his time as the Doctor by returning to
Victorian London in a specially extended episode. A new era begins with a new
leading actor but not without revisiting what has gone before.

The story replicates a tried and tested formula for debut
stories, introducing the new Doctor by surrounding him with already established
elements. The return to that particular time period means bringing back the
popular semi-regulars Madame Vastra, Jenny and Strax. This allows viewers to
see other characters interact with the new Time Lord, Vastra being the mature
voice of reason and wielding her intellect in a memorable scene confronting Clara
about her attitude towards the Doctor’s new appearance. Strax is once again
great value, a comedic foil with some very witty lines, which has sadly tarnished
the image of the Sontarans, but he is one of the best characters of modern
Doctor Who. Jenny is once again overshadowed by the two other much stronger
characters but adds balance to complete the trio.
A returning villain to do battle with the new Doctor has
been done before in The Power of the Daleks (1966), Time and the Rani (1987), New Earth (2006) and is another example of combining the new with the familiar.
However, the clockwork droids are largely unrecognisable from their first
appearance in The Girl in the Fireplace (2006), during which they are seen in beautifully
classical and ornate costumes. This appearance, however, sees them more graphic,
in keeping with the more adult direction which the programme takes in this
season. The Half-Faced Man is an incredible creation, raising the bar to new
heights for effects work seen in a television programme. London based VFX company Milk delivered a thoroughly convincing hollow structure and the visible
internal mechanics of rotating cogs. Also of note is their work on the Tyrannosaurus
dinosaur in the opening sequences, just imagine how good Invasion of the
Dinosaurs (1974) would be if remade today, stomping around London.
Peter Capaldi is, as expected, breathtakingly brilliant in
the role he had coveted since childhood, delivering a layered performance which
cements his position as one of the top Doctors. Debut stories can be
challenging because of the need to combine a number of different elements but
the journey the doctor ventures makes this story one of the most enjoyable
debuts ever. Stumbling out of the TARDIS confused and suffering from post-regeneration
amnesia proves that Capaldi can be humorous as well as serious. The key to this
incarnation of course is those serious moments and the turn to a darker doctor,
starting with the demise of the dinosaur which makes him angry, triggering that
turn and self-discovery. During that process there is wonderful scene with
Capaldi and Brian Miller, husband of the late Elisabeth Sladen, in an alley
where the Doctor postulates about why he has a face he’s seen before, a thread
we have still to discover. There are also brilliant lines about his ‘attack eyebrows’
and being Scottish. Following this we get the first proper scene between the
Doctor and Clara, a relationship which develops very quickly and in no time
they are investigating the larder beneath the restaurant. However, in a
shocking turn the Doctor abandons Clara, leaving her with the Clockwork droids.
Jenna Coleman is phenomenal when confronted by the Half-Faced Man, floundering
under her fear before rediscovering her inner strength and more importantly her
faith in the Doctor.
Sadly the phone call from the previous incarnation, Matt
Smith, is a transparent attempt to convince younger members of the audience to
accept the scarier and intimidating new Doctor. This is perhaps wise when you
consider the implication of the Doctor having pushed the Half-Faced Man. But
still it does seem to overshadow the work already done during the episode;
Clara found her faith in the Doctor only to lose it once again because she didn’t
know him. This misstep is quickly rectified however when Clara realises that
the Doctor needs her because he is just as scared as she is.
Overall, the story is superb, introducing Peter Capaldi’s
Doctor to the world in a perfectly structured adventure. The plot concerning spontaneous human combustion and the clockwork repair droids is intriguing but the focus is rightly on the new Doctor. The character begins to find himself gradually over the course of the story and more importantly his companion, friends and the audience accept him.
Tomorrow, I will be venturing ‘Into the Dalek’!