Their placards (seen below) proclaimed: “Have a heart, classic Doctors want a part!” and “No classics? No 50th!” 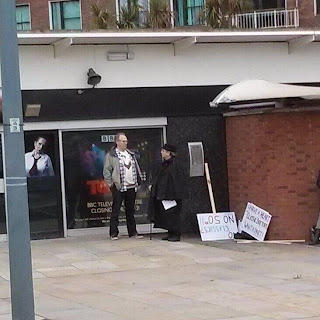 Fans have been left wondering if this was a genuine protest, a new skit from Peter Davison for Gallifrey One (the US-based fan convention site) or even an effort from the BBC at distracting fans from the filming of Matt Smith’s final appearance as the Doctor in the Christmas special, which began yesterday.

What do you think? Let us know in the comments below.