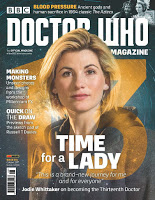 Last month Jodie Whittaker was revealed as the first female Doctor, taking over from Peter Capaldi in the upcoming Christmas special. As is tradition, Doctor Who Magazine has celebrated the news with a special cover featuring Whittaker.

Doctor Who Magazine Issue #516 features the magazine’s first interview with the new leading lady and DWM itself welcomes a new leader as Marcus Hearn debuts as the magazine’s new Editor.
Other features include an exclusive peak at the sketch pad of former show runner Russell T Davies, unseen photos and designs from Millennium FX and a look at the classic First Doctor story The Aztecs.
DWM Issue #516 will be available from Thursday 24th August from all good newsagents, priced at £5.99.
[source]