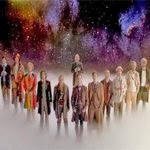 Hello! My name is Jenna, one of the new additions to The
Gallifrey Times’s team. I’m very excited to get started on this adventure,
especially entering a new era with the Twelfth Doctor.
I am a fairly new Whovian. Running a fandom blog on Tumblr,
I had seen posts about Doctor Who quite a lot, but I didn’t want to add yet
another obsession to my list! (Unfortunately, seeing those posts on Tumblr
meant that I knew several spoilers before I ever watched the show. Oops)
On Halloween night 2012, I finally cracked. I asked my
sister if she wanted to watch the first two episodes of the revival, Rose and
The End of the World, with me. The rest is history! We watched the whole
new series by the end of January (watching The Snowmen out of order to
see it live) and I have been hooked ever since.
After I watched the new series through three times, I
finally made the decision to watch the Classic series from the
beginning (yes, missing episodes included! I watched the Loose Cannon reconstructions). I started that in January and I am almost finished with the Pertwee
era now. It’s probably going to take me until the end of the year! Not that I
regret it in the slightest. It’s been great fun!
My favorite revival episodes are Vincent and the Doctor,
Blink, Human Nature/Family of Blood, and The Name of the Doctor.
As you can probably tell, I love episodes that make me cry! So far, my favorite
classic serials are: The Mind of Evil, Inferno, Spearhead from Space, The
Enemy of the World, The Aztecs, The Dalek Invasion of Earth, The Romans, and
The Three Doctors.

If you’re interested in my writing adventures (and occasionally some talk of Doctor Who, of course!) visit my Twitter @jenna_devillier or my personal blog jennadevillier.wordpress.com.