Everybody’s favourite redhead joined the social networking giant today with a simple “Hi twitter…nice to meet you”. She also forgot to turn off email notifications. The deluge of followers and tweets she received after fellow Doctor Who actor Arthur Darvill tweeted about the event, including a retweet featuring the star about to send her very first tweet.

Karen seems undaunted however, having thanked all her followers and tweeting a picture of her and Matt Smith making silly faces. She joins Arthur Darvill and showrunner Steven Moffat, as well as several of Dr Who’s less well known but jobbing writers. Oh, and Mark Gatiss. The guy who gave us Spitfires fighting Daleks in space with laser beams.

If you’re on Twitter and want to follow Karen, you can find her at @KarenGillan2, Arthur Darvill goes by the handle @RattyBurvil and the Dark Lord himself is simply known as @steven_moffat. Also I’m at @TheBatElijah. I’m not related to the Dr Who show in any way, but still. Oh, and she confirmed she’s in New York. 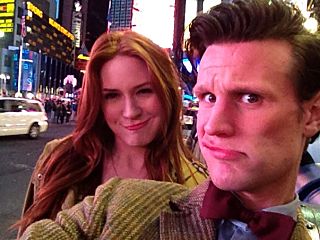