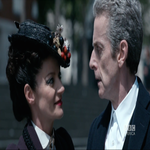 This article contains spoilers from the finale “Dark Water/Death in Heaven.” Please click away now if you have not seen it yet.

Michelle Gomez confirmed in an interview with Doctor Who Magazine (Issue #480) that her character will reappear next season, saying:

Can I say that? Am I allowed? If not… well, I guess we’ll have to see how she’s received…”

With the reveal at the end of “Dark Water” that the mysterious Missy is, in fact, the Master in female form, Michelle Gomez became the seventh person to take on the infamous role of the Doctor’s arch-nemesis. Gomez says of the decision to change the Master’s gender:

“Everything about making the Master [into] the Mistress kind of ups the ante. It makes everything that little bit more dangerous. It blows open this Pandora’s box.”