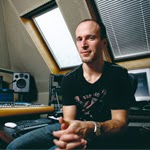 Murray Gold has been the composer for Doctor Who since its revival in series 9. Responsible for such iconic pieces as “I Am the Doctor,” the companions’ themes, and “Vale Decem,” Gold’s scores have set the mood for the Doctor and his adventures through time and space.

He spoke to The Doctor Who Online WhoCast Podcast this week about his progress on the score for series 9, and gave a teaser about a song he has written for it. He said:

A song – there’s some people playing instruments in the background and they’re singing stuff. They need a song. So that’s always fun!”

Series 9 will air this autumn.