Skip to content
The BBC Doctor Who team have today announced that fans will be treated to some new information about November’s anniversary episode ‘The Day of the Doctor’ tonight. In a blog post on the official site, it was revealed that immediately before and after Atlantis on BBC One, they will screen the official ident and hashtag for the episode. 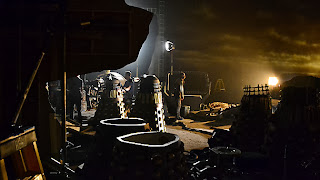 As well as also unveiling a candid ‘behind the scenes’ shot from the filming of the episode, they also confirmed that a brand new trailer will soon be seen on screen.

“We recently announced a raft of programmes that will be help celebrate the Doctor’s anniversary but stand by for several surprises en route to the 50th… One of them is a brand new trailer, specially written and shot for The Day of the Doctor. It’s never been seen before and is currently in post-production. Bold, brilliant and unexpected, it promises to be an ideal way to look forward to the big day – 23 November.

“We’ll bring you that trailer as soon as we can, but in the meantime, here’s a shot from behind the scenes of its production. And don’t forget to catch the stings tonight on BBC One around Atlantis! If they’re on a little late for you, don’t worry, we’ll have them right here on the official site so you can watch for weeks after they air!”

Posted in News and tagged 50th Anniversary, The Day Of The Doctor