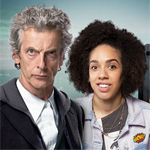 The BBC has announced that a number of stars from Doctor Who will be attending Comic Con in New York later this year.

The Twelfth Doctor himself, Peter Capaldi, will be making his New York Comic Con debut alongside new companion actress Pearl Mackie. They will be joined by show-runner Steven Moffat and executive producer Brian Minchin. The Eleventh Doctor, Matt Smith, and former companion Karen Gillain, will also be at the event.

As well as the stars of Doctor Who, members of the cast and crew of the spinoff, Class, will also be in attendance. Stars Greg Austin, Fady Elsayed, Sophie Hopkins and Vivian Oparah will be joined by executive producer Patrick Ness.