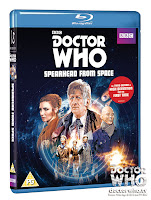 The nice chaps over at Doctor Who TV have announced details for the upcoming Blu-ray release of the Jon Pertwee serial Spearhead From Space. The cover art for the release can be seen to your right and details of the contents can be found below:

Exile! The Time Lords have banished the newly regenerated Doctor to Earth. But The Doctor isn’t the only alien to have arrived, as a swarm of meteorites have crashed into the sleepy English countryside, bringing with them a terrible new threat to mankind. As the Nestene plan takes shape, UNIT, the Doctor and his newly appointed scientific advisor, Liz Shaw, race against time to stop humanity from being replaced by a terrifying plastic facsimile race. With an Auton army on the rise, and no TARDIS to help him, could The Doctor’s latest incarnation be over before it has truly begun…?

The Blu-ray release of Spearhead From Space is released on the 15th of July. You can now pre-order the release from all major stockists.