Today the BBC released a gorgeous promo wallpaper by Lee Binding to promote the return of Doctor Who to television in the next few weeks. As you can see below, it depicts the Doctor and Amy among their greatest foes in the series opener, Asylum of the Daleks. It is available to download as a wallpaper in both 4:3 and 16:9. 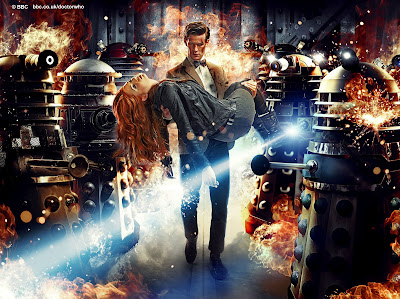 Lee explains the process and the effort that went into producing this image:

So proud to have done this. Huge thanks to Edward Russell for his brilliant guidance – and nipping down to the Cardiff basement to photograph the Special Weapons Dalek when we ran short of pictures. We like to think that the SW Dalek has been trundling around various BBC corridors since 1963. Photoshop users may like to know the final file was over a thousand layers, and 4.9gig in size. Phew!

I don’t even like using two layers on Photoshop. I can’t imagine how painstaking it must have been to create an image with over a thousand layers. The overall effect is stunning, though, and holds up the promise of a sensational series about to be released. Hopefully this image will be released as a poster!