Award-winning author Derek Landy has been confirmed as the author of the tenth book in the series of short eBooks written to celebrate Doctor Who’s 50th Anniversary.

The blurb is as follows:

When the TARDIS lands on a planet that looks identical to Earth, the Tenth Doctor and Martha are amazed to find it packed with fictional characters from her childhood. But who has the power to create an entire world out of books and why? The Doctor and Martha must solve the mystery before their story ends! 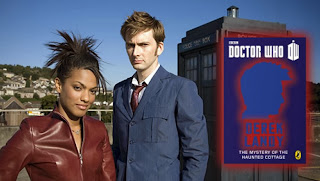 Lifelong Who fan Landy clearly enjoyed the experience of writing for the series.

‘”I can proudly say that I was one of those kids who hid behind the sofa while experiencing Doctor Who (one doesn’t ‘watch’ Doctor Who, one experiences it) and that crazy blend of science fiction and adventure and horror has made me the writer I am today. I owe the character, in whatever incarnation, an enormous debt of gratitude, so when I was offered the chance to write a Tenth Doctor adventure my answer was always going to be ‘yes’. The Tenth Doctor, with his love of the spoken word, was practically tailor-made for me, and there is no part of this story that I did not write with the utmost joy. It all started with ‘What if the Doctor met the Famous Five?’, and went on from there…”

‘The Mystery of the Haunted Cottage’ will be released on October 23rd and is available to pre-order now through Amazon and iBookstore, and a paperback anthology and audio collection of all eleven stories will be available to purchase alongside the as-yet untitled eleventh story on November 21st.

Posted in News and tagged ebook