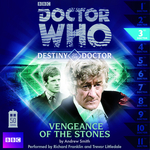 As part of the BBC’s celebration for Doctor Who‘s 50th Anniversary, the third entry in the Destiny of the Doctor audio dramas has been unveiled.

Vengeance of the Stones will feature the Third Doctor uniting with his long time friend and ally Brigadier Sir Alistair Lethbridge-Stewart for an investigation on the Outer Hebrides concerning some strange neolithic stones. The first two entries were Hunters of the Earth, which featured the First Doctor and Susan in an adventure prior to the beginning of the show and Shadow of Death, a Second Doctor story co-starring companions Jamie and Zoe.

This ongoing series will, like the Doctor Who e-books, be released one per month and each star a different Doctor. Vengeance of the Stones is set for a March release and will be sold by AudioGo.