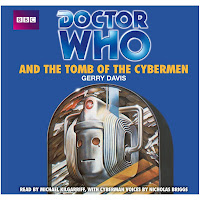 Read by Michael Kilgariff
with Cyberman voices by Nicholas Briggs

Reviewed by Emrys Matthews for The Gallifrey Times


The latest Target Novelisation to get the audiobook treatment from AudioGO is the Patrick Troughton story Doctor Who And The Tomb of The Cybermen.

The Doctor, Jamie and Victoria arrive on the planet Telos and join a group of human archaeologists on an expedition to uncover the Tomb of The Cybermen. It soon becomes apparent that the Cybermen are very much alive, and some people in the group very much want to reactivate the metal warriors. Will the Doctor be able to defeat these ruthless, power-seeking humans and the Cybermen?

The release, though enjoyable is almost archaeological itself, with its beautiful image of the incorrect Cyberman on the cover and referring to the Doctor by name as “Doctor Who.” These are both inaccuracies of the original that have been carried forward to give accurate representation of the novel.

That aside, the novel and, indeed audiobook are well written and fairly truthful to the original television production with only a few minor differences: The introduction provides a brief synopsis of the birth of the Cybermen and the events of The Tenth Planet and The Moonbase which nicely sets up the whole piece. The human giant Toberman is, for some reason described as being either Turkish or Middle Eastern and the Cyber-Controller is described as having a black helmet, like the Cyber-Leaders seen later in the series.

Michael Kilgariff who portrayed the Cyber Controller in the original television story, but didn’t actually voice the character gives a wonderful and engaging rendition of this fan-favourite story. Kilgariff is the biggest highlight of this release that is worth a listen just to hear this wonderful actor clearly enjoying reminiscing and getting the chance he never had in the series to really show off his vocal talents.

Nicholas Briggs provides accurate Cyberman voices which adds a bonafide quality to proceedings. All in all it’s a wonderfully realised opportunity to elaborate upon the original and much loved story that is The Tomb of The Cybermen; even if they did keep the mistakes from the novel…

The Gallifrey Times Rating: 7/10
Many thanks to AudioGO for providing the audio for review.
Pictures courtesy of AudioGO.