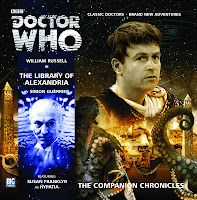 Reviewed by Graeme Bentzen for The Gallifrey Times.

This review may contain spoilers.OK, so I’m going to admit it. I have hated the Companion Chronicles range since my first and only listening experience began (and ended) with the Colin Baker vehicle Beyond The Ultimate Adventure. With the bulk of my Big Finish listening largely being from the main range, I found the whole experience boring and disengaging to be honest. How narrow minded I must be that it’s taken until now for me to dip my toe back into the relatively uncharted water of The Companion Chronicles. Was my decision to go back in vain?
Yes it was, for one reason alone, my decision not to go back sooner than now was my biggest mistake. I will admit that on receiving this audio adventure, I thought, especially after reading the cast list of only two, that this was to be my second negative Big Finish review in a row. How wrong I was (again!), Ian Chesterton played by the always fantastic William Russell and Hypatia (Susan Franklyn) had me listening on the edge of my very comfy office chair. I can’t remember the last time that happened!
The setting of the overall scene for this adventure is beautifully constructed, the musical score and sound design of Toby Hrycek-Robinson was poetry in motion in itself. William Russell’s subtle but enchanting tones become almost memorizing in parts. It seems as years go by, his understanding of how to convey the adventures of the first Doctor in modern times increases by each Ian Chesterton performance he puts in with Big Finish. One thing about this tale I became instantly enamored to was the warmth and fondness that was conveyed by his performance. Obviously his voice has aged, but I almost felt like I could have been sat with him while he reveled in telling me tales of old.
Susan Franklyn was equally fantastic. The potential love interest between the two cast members characters was beautifully worked. It felt like they knew it was there, however with Ian’s potential feelings for Barbara and the possibility these feelings may be reciprocal, along with a particularly touching scene at the end (the farewell’s) they both knew it would never happen, but the sharing of a well portrayed mutual respect for each other was faultlessly communicated to the listener.
Although not at first, Russell’s Hartnell impressions where not as convincing as perhaps as Frazier Hines’ Troughton tones, they improved over the course of the perfectly constructed 60 minute episode. Watch out for perhaps the last 10 minutes of the adventure. I almost felt that Russell was Hartnell, with his simply pitch perfect re-enactment of words that made you feel like you were catching the old fellow back in action once again.
You may think that I haven’t covered the finer details of this episode enough, The Nim’s being very engaging to listen too, largely down to the aforementioned superb sound work in this episode, the near destruction of Alexandria itself is all fantastic too, but I won’t go into further detail. There is a reason for this. I don’t want to tell you one little bit more than you need to know. The reasons for this are explained below.
This adventure has renewed my faith in the Companion Chronicles series and I personally feel that for 60 minutes of your time (an ideal time may well be a Saturday evening, when you’ll shortly have a spare hour or so in June) this is best worth listened to with only my vague appraisal of the actors and production values themselves.
The listening I will leave, very much so, in your capable hands. Enjoy guys, these things don’t come around often.
The Gallifrey Times Rating: 10/10
Many thanks to Big Finish Productions for providing the audio for review.
Picture courtesy of Big Finish