In a change from our regular spoiler-free review policy, we’ve decided to try something different. So be warned, this review is absolutely, positively, wondrously spoiler laden. If you don’t want spoilers for The Angels Take Manhattan, look away now.

OK, so. The last ever appearance of the Ponds in Doctor Who. The show opens in the 1930’s with crime boss Mr. Grayle (Mike McShane) hiring private investigator Sam Garner to investigate the ‘moving statues’  in a building called Winter Quay. Once inside, he finds a room inhabited by an ancient version of himself, before being sent back in time by a Weeping Angel. This opening is very tense, a great blend of film noir and the supernatural; it’s very reminiscent of the opening of The Impossible Astronaut. 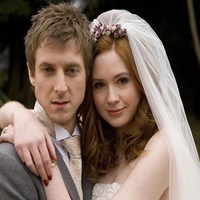 We find our three heroes chilling in Manhattan with a picnic, the Doctor being particularly enthralled in the Noir novel Melody Malone he found in his jacket. When Rory  goes off to buy some coffee, he’s zapped back in time by a Weeping Angel and meets River Song, who’s dressed the part of a private eye. The two of them are quickly taken to Grayle, who wants the expertise of Melody Malone. Three guesses who’s using that identity.

So we’ve got Rory being buffeted through time by the Angels, River trapped by Grayle and Amy and the Doctor struggling to return to the past and save the day.

A lot of this episode feels padded, but it’s not quite padding. A lot of time is dedicated to the interactions of the various characters and tying up the various themes of the Pond’s run on the show. The story is really just an excuse to ensure the Ponds are completely beyond the reach of the Doctor, and the focus on the emotional buildup instead of a more frenetic, action oriented approach is a big reason why this episode works.

It doesn’t work everywhere though. Given that you’ve got a Weeping Angel story set in Manhattan, how can you not have the Statue of Liberty turn out to be one of them? So they do. And I do not buy it. I don’t buy that something that big can go walkabouts and not have it be a big deal. There’s also the ending, but I’ll get to that later. 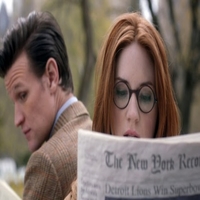 One thing that I won’t blame fans for noticing that the logic of this episode really doesn’t hold up under close scrutiny. For example, why can the Angel that escaped the paradox still zap people back, but the one in Grayle’s office can’t? For that matter, how can you keep an Angel captive with just a set of chains when it’s hidden from sight? And why doesn’t the Angel escape when nobody’s looking at it? It could high tail it back to Winter Quay and stock up on energy. How come the Angels’ plan to create fixed points can be undone by creating a paradox, but when River averted a fixed point it unmade the universe? And how comes a paradox here is fine, but the Master had to cannibalise the TARDIS to maintain back in Series 3?

This problem will probably shine through a lot more on reviewings. As will my other main problem. I mentioned earlier that I took issue with the ending, and the real problem is that there’s two of them. The first is heartwrenching, hitting all the right thematic and emotional pitches. Rory know he has to jump off the roof of Winter Quay to stand any hope of surviving his fate as part of the Angel’s plan, but that it could very well end in his death. Amy insists on jumping with him, preferring they die together to even the slightest chance that they could be separated.

After this, we cut to the whole gang, together and alive in the present day. Just when it seems that all will be well and the Ponds will just say they’ve had their fill of adventures, Rory gets zapped back in time by an Angel that survived the paradox that killed the rest of them. And so Amy opts to let the Angel touch her in the hopes that it’ll take her back to where Rory is and they can be together (because their timelines have become too muddled to rescue Rory in the TARDIS). 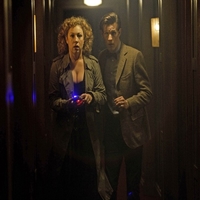 See the problem here? Thematically and emotionally it’s the same ending, just with longer goodbyes and less coherent logic. Add in Rory’s sacrifice and the ambiguous, bittersweet tone of the rooftop scene and you have a much stronger ending. The goodbyes were nice, but rendered unnecessary by the scene where the Doctor reads Amy’s message in The Melody Malone book.

Though it did sustain that high level of emotion when I first watched it, the final graveyard scene is really unnecessary and adds nothing that we didn’t have elsewhere already.

As a farewell to the Ponds, this is an excellent if flawed send off. I don’t think it’ll become a classic episode on its own merits though, if only because the numerous flaws won’t have the disguise of the huge emotional high on subsequent rewatches. Safe to say, if you’re a fan of the Ponds, this one will have you reaching for your tissues.

Posted in Review and tagged Doctor Who, Review, Series 7, The Angels Take Manhattan