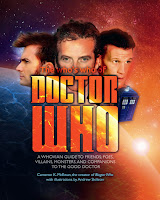 Race Point Publishing
The Who’s Who of Doctor Who

How do you group every character from Doctor Who‘s 50 years in one book? The Who’s Who of Doctor Who, written by Cameron K McEwan of Blogtor Who fame, attempts to do just that.
Who’s Who is essentially an in-universe encyclopaedia of the characters that have defined Doctor Who over its 50 years – from the Doctors, companions, monsters, villains and friends and more. Not everyone who’s ever been in the show is included, but with over 300 entries, it’s pretty exhaustive, with entries ranging from recent series characters like Kate Stewart to classic characters like Jamie McCrimmon.
Of course, the most important thing in any handbook is writing – and McEwan’s clear, well-versed writing is excellent. It’s clear in the quotes and references that Who’s Who is full of that McEwan knows his stuff about Doctor Who, and is clearly a huge fan, of course.

It’s not a small job either to blend together 50 years and 800 episodes (though the book doesn’t contain any mention of The Time of the Doctor and only what was gleaned from The Day of the Doctor‘s filming, though this isn’t really a flaw at all)

There’s also the matter of looking good – and from the shiny cover featuring David Tennant, Matt Smith and Peter Capaldi to the colourful pages, Who’s Who is as glossy as any official BBC publication (if I really had to nitpick, there’s often images of actors used rather than the actual characters who often look extremely different, but I would assume this is down to image rights).
Special mention, however, has to go to illustrator Andrew Skilleter, whose pencil drawings are consistently excellent, looking unerringly like the real thing. It’s not Skilleter’s first Doctor Who job, but it’s clear here that he’s an extremely talented artist.

Overall, The Who’s Who of Doctor Who is a comprehensive, well-written and handsome guide to the world of Doctor Who. Whether you’re a newbie to Who and want to catch up on the show’s fifty years, read up about the classic era or familiarize yourself with your favourite characters, it’s a book that’s perfect for pretty much any fan.

Posted in Review and tagged Review, The Who's Who of Doctor Who