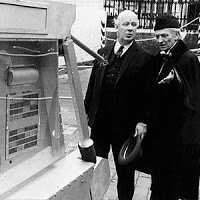 For over 50 years, Doctor Who has been evolving. The changing lead actor, the advancement to colour and the improvement in special effects have all changed the show dramatically. But there is one aspect that has evolved and strikes me as very interesting: violence in the show.


Doctor Who was meant for children, but it soon turned into a family show while today, it might still be a family show but teenagers and young adults are the ones who watch it most. The audience shifted a bit and let’s be honest here: as much as I love Doctor Who, I’d rather have my younger children watch the First Doctor than the Eleventh or Twelfth Doctor’s adventures.

The show has most notably evolved in an artistic and graphic way. Thanks to special effects, the incredible can become believable. But back then, in 1963, creating a science fiction show was not that easy. Special effects weren’t that advanced (I’m going to avoid mentioning the limited budget that certainly didn’t help either) but viewers were still impressed with what the show had to offer.

But the show has evolved with society; it had to meet the audience’s needs and expectations. It’s not unlike a literary phenomenon. Take gothic literature for instance. The idea of something terrible and/or supernatural being suggested is impressive enough for the reader who doesn’t ask for more in the 19th Century. Then, as society evolves, the readers want more. They want details; they want descriptions of said terrible and/or supernatural events. The genre eventually evolves to become more graphic. A sub-genre was born: “gore”. This is a shortcut of course. It took something like a century or so to reach that point. But today, progress being so fast, it took only 55 years to go from a show “suggesting” violence to one that is actually showing it.

I always keep that scene from The War Machines in mind, when soldiers shoot at the machines and the only indication of the guns being shot is the noise they make. I found that scene quite fascinating because of the message it conveys. This is quite a violent scene. This is war. And yet, it’s ‘suggested’. Now imagine the same scene shot today. There would special effects, fire, smoke, stunts… I think that we can all agree that the scene wouldn’t look anything like the one shot in 1966.

Now, considering that the Doctor hates weapons, that he hates violence, what does that evolution of the show tells us? That the goal evolves too. When the Doctor says: “No one dies today”, I don’t know for you but I’m scared, mostly because I don’t believe him. Because death happens a lot in Doctor Who and while it was suggested 50 years ago, now we can’t just try to ignore it.

However, if there is one thing that hasn’t changed in over 50 years, it’s the Doctor’s relation to violence. Aside from the odd outburst of Venusian aikido, he still rejects violence with all his hearts and only resolves in using it when there is no other choice. As Steven Moffat put it:

But then why is there so much violence and so many invasions and losses in Doctor Who these past years? Maybe because this is part of our evolution, maybe because we are surrounded by violence and therefore we need to acknowledge the fact that we would like having a hero able to love humanity despite its tendency to destruction.

So while The Walking Dead shows the worse in humanity as a lesson, Doctor Who leads to another path. A path where violence is not the answer, but is (sadly) a reality that needs to be fought against.